Julius von Bismarck (*1983 in Breisach am Rhein, Germany) studied visual communication at the Berlin University of Arts, participated in the MFA Programme at Hunter College New York, as well as studying at Ólafur Elíasson’s Institute for Spatial Experiments. Among the awards he has received are the IBB Photography Award (Berlin), the Golden Nica des Prix Ars Electronica (Linz), the Prix Ars Electronica Collide@CERN (Linz) and the Junge Stadt sieht junge Kunst (A young city sees young art) award (Wolfsburg). Julius von Bismarck works on the boundaries between art, science and technology. He investigates the perception, manipulation and documentation of natural phenomena, but also issues of urban space.

Marta Dyachenko (*1990 in Kiev, Ukraine) studied architecture and fine arts, specialising in sculpture at the Berlin University of Arts, among others under Arno Brandlhuber and Manfred Pernice. Her installations frequently involve interventions in landscape settings with model-like sculptures. In her artistic work a predominant role is played by her preoccupation with the relationship between nature and human activity, particularly our socially constructed view of landscape. 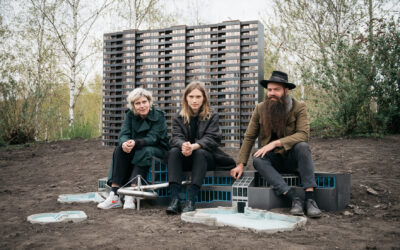 A total of 23 sculptures form a fictitious city, on a scale of 1:25, made up of various real buildings that have been demolished in the Ruhr area since the turn of the millennium.