Addis Ababa, Almería, Baghdad, Fukushima, and Idomeni are just some of the sites for the work of the artist Raul Walch. Driven by his political commitment, the artist not only wants to explore and comment on the world artistically, but also wishes to play an active role in shaping it. For years, Walch’s work has included sailboats, mobiles, kites, and flags designed using colourful patterns, as well as an exploration of their behaviour in the wind. Often, his works are part of a collaborative, performative process. The communal meal at the Seven Corner Table, for example, is only practicable if the tabletop is balanced on the knees of the participating individuals.

For Silbersee II, he is developing a multifunctional platform on the water, which can be used as a social gathering area. Designed as a wind pavilion, it adjusts its position in the water according to the air current. For the windsurfers from the club TuS Haltern, a new series of sails is also being created on site, serving as a canvas on which the artist applies various large-scale patterns. Spherical Semaphore, as this ongoing project is titled, brings the medium of painting onto the water. 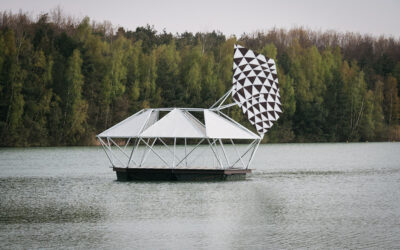 With Assembly, an octagonal island made of wood covered with a roof of brightly-patterned cloth that, Raul Walch has installed a place of community on the open wate.