In Kuwait petroleum has the significance that coal long had in the Ruhr region: an economic foundation and a resource that influences all areas of life. The history and conditions of its extraction surface again and again in Monira Al Qadiri’s work. She also thematises the patriarchal structures of her home country, the pop-cultural imports, and the Gulf War experiences that shaped her childhood in films, sculptures, walk-in installations, and performances. In The Craft, for instance, she presents—in a re-enacted fast-food restaurant faithful to the original—a video piece based on home movies in which reality and fiction overlap. Inspired by cartoon series and the new Americanised cityscape of Kuwait, as a child she imagined a secret alien takeover of the state.

For Ruhr Ding: Klima, Al Qadiri is showing an installation at the former General Blumenthal mine. It is comprised of large glistening and rotating sculptures representing models of drill heads from the context of oil and coal production, but which have the guise of ornamental or even organic entities from the future. 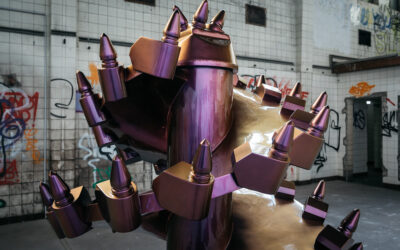 Two vast shimmering objects by Monira Al Qadiri occupy the centre of the abandoned Schwarzkaue. What seem to be machines from the future are reproductions of drill bits from the Kuwaiti oil industry.