Floating in the middle of Silbersee is an octagonal island made of wood covered with a roof of brightly-patterned cloth that is visible from far away. The platform, where tired swimmers can rest or people can engage in conversation, revolves around its own axis, depending on the strength and direction of the wind. With Assembly, as this work by Raul Walch (*1980) is entitled, the artist has installed a place of community on the open water. The word assembly has a dual meaning: an occasion for which people come together and the montage of different components.

Further away on the lake is where the windsurfers of TuS Haltern e.V. train. In co-operation with them, Raul Walch will produce a further project: for Spherical Semaphore the artist will paint the sails of their surfboards with coloured geometric patterns that clearly contrast with the usual sporting designs. As the surfers move, the painting will appear on the water in performative form.

Working with a range of textiles, their textures and how they behave in response to various contexts has been a focus of Walch’s work as an artist for many years. His flags on civic buildings or in abandoned areas, his sails mounted on boats that are inflated by motion and wind when these move across the water as well as similar to kites and other flying constructions, are both art and research objects at the same time. He is interested not only in their aesthetic and physical properties, but also their political significance.

The installation Assembly/ Spherical Semaphore was developed as part of the exhibition Ruhr Ding: Klima and was on display from June 2—June 27, 2021 at Silbersee II in Haltern am See 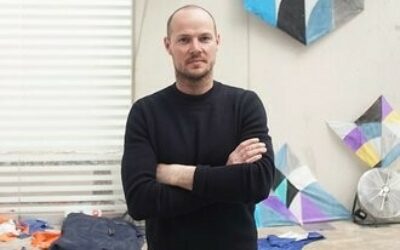 Driven by his political commitment, the artist not only wants to explore and comment on the world artistically, but also wishes to play an active role in shaping it.