At glance, Paul Sochacki’s (*1983) paintings move between abstraction and romanticism: a lion slobbers ice cream in front of a giant globe, a group of mice line up in front of a piece of cheese filled with holes, a white swan on a black lake, its head disappearing in fog. This Berlin-based artist’s visual language throws us back into the world of childhood complete with all its myths, fabulous creatures and phantasms. At the same time the poetry and humour of these familiar motifs coax us towards complex readings. Once we immerse ourselves in his stories, we also begin to recognise connections with real situations and their social contexts. Behind the innocuous surface, complexities and manifold problems open up: although his pictures may some-times appear childish and fairy tale-like, they often represent a sharp reflection of social conditions that also concern Sochacki as a co-editor of the street magazine Arts of the Working Class.

Paul Sochacki’s contribution to the Ruhr Ding: Klima not only combines painting and digitisation, it also links together the different exhibition venues: via augmented reality his ghosts at the Silbersee also appear at information points and cycle stations of the Ruhr Ding: Klima at the railway stations in Gelsenkirchen, Herne, Recklinghausen and Haltern-Sythen. Using a smartphone or tablet, they can be summoned to the various locations simply by scanning a QR-code. The web-based application uses your device’s camera to make the ghost appear in your surroundings.

Specifically, we see the superego of the imperial eagle that continues to haunt Germany. At Paul Sochacki’s request, the apparition animated by the Łódź-based 3D artist Alek Sarna manifests itself in short poems that vary from location to loca-tion, reflecting the current social climate, and are accompanied by organ music by Michael Leyk. 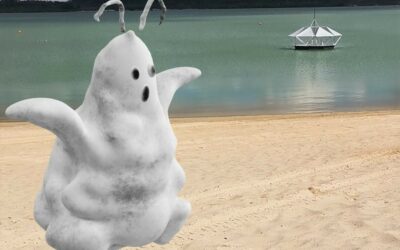 Via AR Paul Sochaki's ghosts at the Silbersee also appear at information points and cycle stations of the exhibition at the railway stations in Gelsenkirchen, Herne, Recklinghausen and Haltern-Sythen.